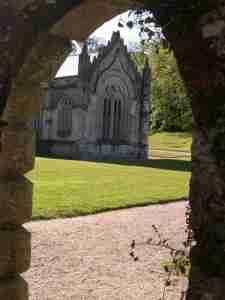 For idealistic, or perhaps pecuniary, reasons the Vyvyans have a long history of standing by the King.

In 1328 Richard Vyvyan and his sons attacked the usurping priest at St Buryan (placed by the Bishop of Exeter not the King) causing ‘great bloodshed and violence’ and they were excommunicated at St Michael’s Mount, with bell, book and candle by the Bishop, ‘wearing his stole’ no less, for their trouble. The Bishop won the fight over the rights at St Buryan and the King lost – and presumably so too did Richard Vyvyan although he doesn’t seem to have been overly careworn by the experience.

In 1536 Richard Vyvyan presented a masque for the King in Oxford and was knighted for his trouble and (considerable) expense. During the civil war he was a Gentleman of the Privy Chamber and Master of the Mint at Truro and at Exeter. Unfortunately the King lost the war and his head to the roundheads, who were of course Revolting but Right.

In 1752 Sir Vyell had the house re-modelled and the garden re-designed to show to the new(ish) Kings that the Vyvyans had finally turned their backs on the Stuarts. I’m sure it had been giving them sleepless nights. 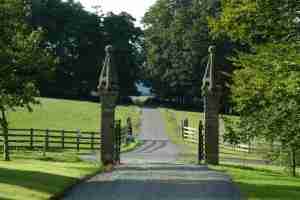 In the 19C Sir Richard Vyvyan fell rather heavily for one of the royal nieces and invited Queen Victoria to visit Trelowarren. In order to make a good impression he built a new quay at Tremayne, a new boathouse for the royal barge and several miles of new drive to the house from the river. Unfortunately the weather was inclement and on the day the Queen decided not to come. Much later Edward VIII came for a quick visit and used the quay and was, according to Lady Vyvyan, ‘charming’. Unfortunately he had a yacht hanging about offshore and on board was Wallace Simpson and before the tea cups had been dried he’d abdicated.