Septimus: ( to Thomasina) We shed as we pick up, like travellers who must carry everything in their arms, and what we let fall will be picked up by those behind. The procession is very long and life is very short. The missing plays of Sophocles will turn up piece by piece, or be written again in another language. Ancient cures for diseases will reveal themselves once more. Mathematical discoveries glimpsed and lost to view will have their time again. You do not suppose that if all of Archimedes had been hiding in the great library of Alexandria, we would be at a loss for a corkscrew?” – Tom Stoppard Arcadia Act 1 Sci

It would be quite impossible to replace old with new at Trelowarren. There are many reasons and one of them is that it would be immoral and the other that it is impractical and expensive. It is our attitude to unnecessary replacement that puts us constantly at odds with the accommodation rating authority. Apparently the rule is that everything must be replaced every five years, regardless of the landfills that are overflowing. Not so much tit-for-tat, as tat-for-tat. Apparently, if it isn’t ‘new’ then it isn’t luxurious, and if it isn’t luxurious then it isn’t five star. So there. No tick in the box attached to the clipboard for us, and a ‘tsk’ of irritation for emphasis. The ‘tsk’ eloquently denotes our ignorance. How could we not know that curtains must be changed every five years?

Well we do know, we just don’t agree.

It’s tempting to apply Clipboard’s misguided concept to everything:

‘So, that tatty old painting, shall we get rid of that?’

‘Well of course – it is, after all, well past its five year sell-by and best-before. I daresay Mrs. Reynolds thought it was a good enough effort, but you can hardly call it luxurious and anyway look at those trees – they’re not even the right size. They do some lovely new framed prints of sea scenes – you should get some of those.’

‘This old house: no CH, no underfloor heating and no double glazing?’

‘Those two yew trees, planted about 750 years ago?’

I sometimes wonder if you need to have been born in the long shadow of the war and rationing to know that the careful preservation of things is desirable and even necessary. One of our family jokes is about the saucer of peas that was always in my mother’s fridge; well actually the fridge’s standard contents were the peas, the antibiotics for the horses and some very elderly cream. ‘Clotted cream doesn’t go off,’ she’d declare as she put it on the table – again.

So, it is with considerable smugness that I sit on, and look at, The Sofa. Purchased in 1957 by my mother, we have a photograph of my sisters and I, impossibly clean in frocks and socks, sitting in a row on this sofa. Later, when I was a cross teenager, it was the slightly collapsed favourite sofa for lying on to read, and when I came to Trelowarren with it, I had the springs mended and the calico re-done. Thirty years later it was the favourite dog sofa and as such it reached a state of such awful smelly collapse that was deemed unacceptable. So, after the demise of the dog, it was carried away to a barn because I couldn’t bear to let it go.

This year P&C Upholsters from Helston have re-built it. The fabric they used is old linen union curtains. Trelowarren curtains with a Chinese pattern. Curtains which we have already re-made three times. The Sofa is the material’s fourth and final iteration. 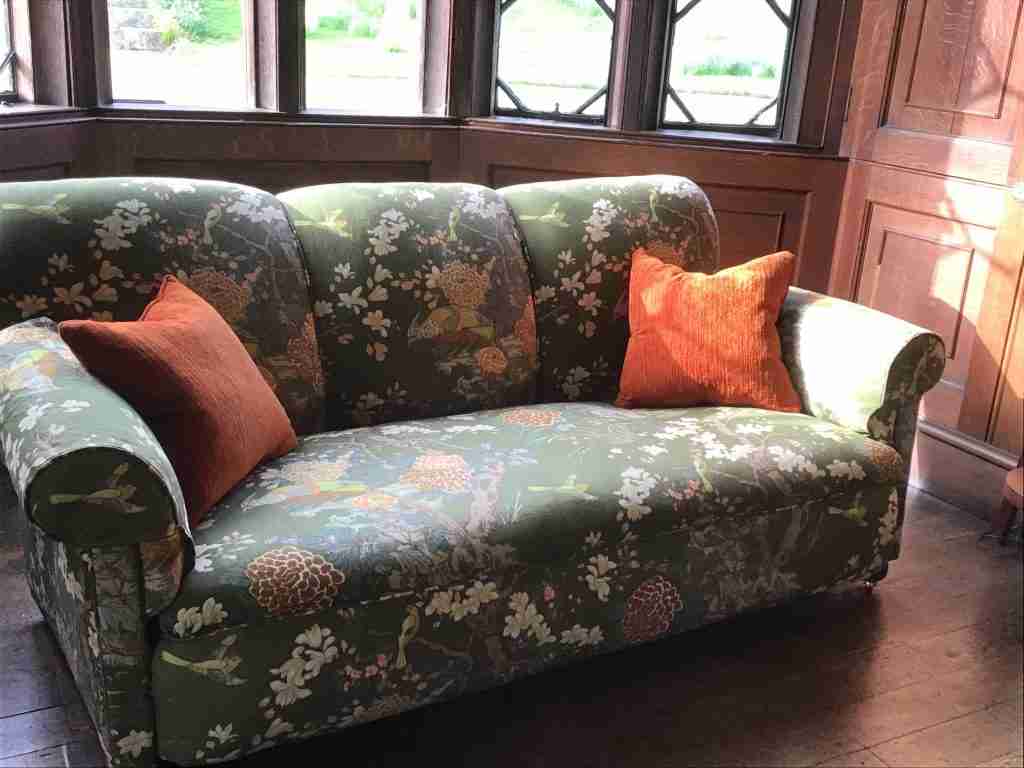 The work is beautifully and carefully done with the patterns perfectly lined up. Chrysanthemums feature, and an exotic bird improbably perched on a cherry blossom branch is in the middle of each panel. A lovely touch is that the arm covers have a small bird at the front. Everything about the sofa feels as if it has been thought about, and if there are patches faded by time and the sun, I like them even more.

This sofa will now see me out.