Water outside – Water inside – December blog by Victoria Vyvyan

We’ve had a wet autumn.

The rain has come from all of the cardinal points. It has drifted sideways in veils; it has poured down vertically in sheets; it has battered the windows so hard that some just gave up and blew out; it has come in gusts and flurries making the scaffolding groan like a ship at sea; and sometimes it has slunk through the chinks in our armour as a cold mist – somewhere between water and vapour.

From September to April we obsess about gutters and drains.

An agile person can easily access some of the roof through skylights and a foolhardy person can get to other parts by climbing up a slimy, wet, wooden ladder in Debtor’s Well which should have ‘death trap’ written on it.  But sometimes the bloody heavy triple ladder is the only way. It is both despairing and oddly exhilarating to be staggering around in circles trying to get the ladder extensions up, in the dark and the rain with waterproofs and wellies on over your pyjamas. It’s somewhere between The Last Grain race and the storm scene in Far from the Madding Crowd. You have to access your inner Gabriel Oak and Bathsheba Everdene – I like to think.

In daylight, and ideally in good time, all of the stepped lead gutters that move the rain from the roof to the down-pipes have to be walked and checked. First, the top of the down-pipes (lead buckets) have to be cleared of moss and leaves, because the lead gutters are like basins and if they overflow with a rain build-up the water pours in through the ceilings. 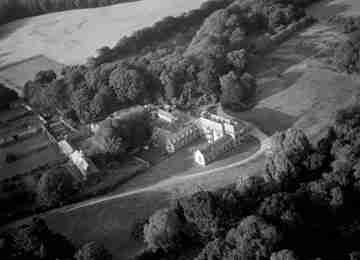 Water ingress rarely has a single cause. Take the chapel. For years we could see terrible condensation on the chapel windows – and now we know why. Holes in the lead above the south side of the chapel, ignored by the departing tenants for many years, have been identified by Joe and Dan and mended. Looking down the down-pipes on the south side of the chapel we can also see daylight coming through a multitude of small holes. A new system has been devised to make sure that the rainwater actually goes down the pipes rather than down the walls. And inside, happily, the walls are beginning to dry out.

Back to the outside. Moss holds the damp against the walls and washes off into the ground level gutters – and blocks them, so a zen way to spend an afternoon is to get an old wallpaper stripper blade to scrape the walls and drip ledges. And finally, the granite gutters that run all the way round the house have to be continually cleared of leaves and mud (where did that come from?) all the way to the drains that disappear into the huge water chambers under the house.

A truth universally acknowledged is that civilisation is measured in drains. In the 18thCentury work was done under the house to make sure that all the spring water from the well under the house was kept separate from the grey water (run-off) and the foul water (no explanation needed). All we have to do is make sure it keeps running. The sound of running water (and sometimes you can hear it under the floors) is A Good Thing. By contrast, silence on a rainy day is A Bad Thing, because it means that the water has found another easier route and somewhere it is gleefully pouring into the building.