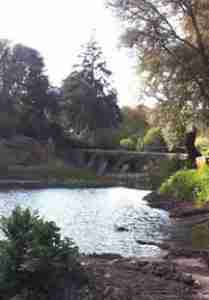 After a two year discussion with English Nature our Higher Level Stewardship contract was eventually signed last year enabling three large capital projects to be scheduled – the relining and repointing of the Pond on the Garras drive, replacing all the estate cast iron railings which were melted down to make munitions in WWII and, finally, a complete restoration of the Double Lodges landscape including a full repair of the two lodges.

These works will occur over the next 3 years and we have started with the Pond restoration this May.

Kingscombe Aquacare won the contract and two enormous swing shovels arrived on site earlier this month. Their first task was to locate and open the lower sluice gate buried some 12 feet in silt. They found this and have now been able to drain the pond, carefully keeping all trout, ducklings and other associated wildlife in a small contained pool.

Having found a large band of clay in the scrub at the bottom of Wayfield, they have extracted enough to reline along the footings of the causeway to seal this and allow scaffolding to be erected along the inside of the causeway so it can be carefully packed with Fullers earth and repointed with hydraulic lime.

They will also fit new sluice gates… hopefully, by the end of June, the waterline in the Pond will remain constant and at the right level. Fingers crossed.