One of the elements of Rowan’s New Yard Shop and pizzeria in the stable yard at Trelowarren is that it will be selling delicious and unusual wine.

Delicious because FV, who has impeccable taste, will be choosing it: unusual because we are sourcing some of it direct from chateaux who don’t supply supermarkets or the larger wine merchants. And all of the choices on the list will be punching well above their weight in value for money. 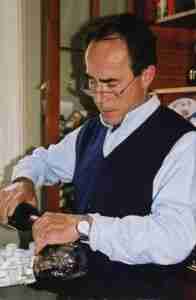 So this week we set off in the comfort and elegance of our rusty and dusty white transit builder’s van to visit various friends and acquaintances in Bordeaux and further south in Cahors. Rowan came home to sail the SS Trelowarren and we forgot to take a map.

First stop Bordeaux (pretty easy to find) to sit in the Boite de Huitres and have a restorative 2 dozen mixed oysters and abalone with a glass of two of Sancerre. First thing the following morning off to Pessac. At 7am as the mist was clearing away from the vines the great chateaux started to appear in the most atmospheric and exciting way (and I’m talking a proper frisson). Still with no map but with a kind of wine magnetism in full force we drove past Olivier, Haute Brionne, Haute Bailly and, and arrived peacefully at Chateau Carbonnieux. All was immaculate: clipped box hedges, roses everywhere and the last twelve dry leaves being raked away as the gates were unlocked for us. Clare was expecting FV and delighted to see him (not sure she was expecting VV) and the first deal of the day was done. Not the obvious Carbonnieux but their second chateau Tours de Leognan. This wine is chosen for a treat; something really good to go with that bass or lobster. 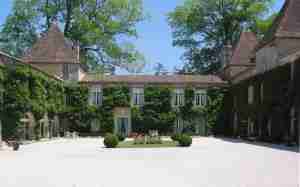 The sun now fully up, we stopped for café complet and headed for our second pick up – Chateau Sante Barbe 2010 – the Good Everyday Red. Ambes was not quite so easy to find by instinct and some small family tension arose as we were swept through the Bordeaux one way system … again. In the urbs we drove past a tower block of flats which was properly on fire, which was weird, and after ten minutes in the zone (tres) industrielle, we were back among the orderliness of the vineyards. Literally ten meters from the great Garonne (just before it becomes the Gironde), and south of the Dordogne, the Chateau Sante Barbe sits on a spit of land that heads to the sea west of Bordeaux. Literally Entre Deux-Mers. And guess what? Another good-looking young Frenchwoman pops up to greet FV like an old friend! Don’t mind me I’m just the driver. 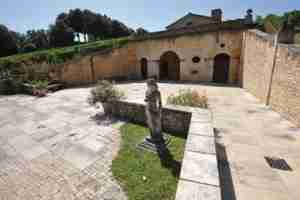 Then south on a personal mission of FV’s to persuade the English to explore the wine of Cahors, but first we stopped to collect Chateau Martinon 2011 – Rowan’s Good White – another Entre Deux-Mers. Here, a beautiful rose for me from Jerome to level the field a little.

And finally to Alain Perrin’s award winning model vineyard Chateau Lagrezette high in the hills around Cahors that were the home of the Cathars. An elegant rose La Grezette, a big second white Viognier and magnums of Zette. And for FV just one bottle of the 2005 Pigonier – for later. And incidentally Christophe was, ‘enchantee’ . Ha!

And then we clinked our way home to sunny Cornwall. Three and a half days, 2500km and not one decent cup of coffee. The French have fallen under the spell of unspeakable push-button coffee machines that produce health-and-safety tepid brown slime. Thank all the gods they are still making proper wine.