The Driveway News – One way system

What is the most frequent comment from visitors? Well the lack of mirrors in second bedrooms features quite highly and is being tackled (despite my neuroses about what happened to Narcissus), but the front-runner by a country mile (or three miles as it happens) is the traffic flow on the historic drives. When it is one-way people complain and when it is two way, guess what?

So why doesn’t two-way work? 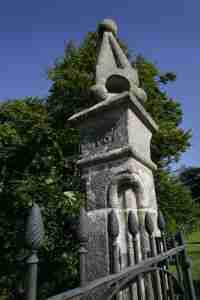 First, the agony of watching philistines plough over and through his historic edges, rendering them to a muddy verge, is going to bring the Landlord to an early grave. And why do people drive along/over/through the edges? Well that’s the second reason. A significant proportion of drivers can’t or won’t go backwards.

Why? That’s an interesting psychological point we have often cogitated. Possibly, we cogit, they feel they are losing status by going backwards.

First there is Ozymandius, King of Kings (aka the delivery van drivers), with their ‘frown and wrinkled lip and sneer of cold command’ who are far too important and busy to consider the beauty of an avenue, and take positive pleasure in carving their way along twenty yards of grass. And then there is the survivor from the jungle. Out there in the world of non-Cornwall life, the daily crust and occasional glass of Chateau Thames Embankment, are (it seems) only achieved by displays of determination and resolve. The kind of person who smiles and reverses to a nearby space is, we assume, not the kind of person who is going to make Senior Partner.

Finally there is the more mysterious ‘can’t’ cohort. They are quite straight about it, ‘I can’t’ they say. And that’s it. It seems rude to ask how they passed their test, so we don’t ask, but we are curious.

We have even had a stand-off where one of the drivers got out a newspaper (in order to prove he wasn’t the going back kind) and they both sat there. Status intact.

An equal number of people are rendered furious by the one-way system. Why, they ask, should they go to Mawgan via Double Lodges when they have, with their Very Own Eyes, seen Other People, going down the Mawgan Drive.

Well here are a few reasons: a) It is actually just as quick (especially if you end up meeting the man with the newspaper b) It helps his historic edges and thus his life expectancy c) People staying at Halliggye are allowed to go that way. If, after their swim and morning coffee, we made them go back to their house via Garras it would be silly. Ditto Jenny in the green van delivering an extra towel.

So, for the record, it’s One-Way. Except where it isn’t.