Hail and Farewell at Trelowarren 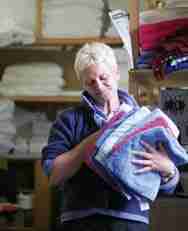 Thirteen years of putting up with us all! Thank-you Shelley.

After a short period happily reading her book at the end of the drive and occasionally taking £1.50 from an angry visitor Shelley was snatched up to the New Yard Restaurant where she worked to moderating the more intense effects of having a French chef. Then she accepted the job of housekeeper and has stayed with us through the expansion from five holiday cottages to eighteen, putting in place a standard of excellence in cleaning that I have rarely seen equalled.

For Shelley everything animate and inanimate had a name: the green laundry van (Sylvia), the solitary quail (Harriet), even the hoovers, the washing machines and tumble driers were the bit part players in The Great Housekeeping Performance. 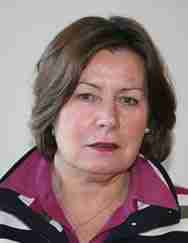 The supporting cast was of course made up of the cleaning ladies but the star of the show, singing, chatting, dressing up the dogs, making chocolate cakes, laughing raucously (and yes sometimes swearing like a navvy) was Shelley.

She house-sat, she dog-sat, she got the horse in and put him out again, she called the vet, she chaperoned our teenagers when we ere away, she roundly dismissed idiot men who built houses without enough cupboard space for a hoover and then she designed a pole long enough to dust the 25ft light wells that idiot men had put into houses without thinking about cleaning. She bought chocolate treats for Ferrers and kept a not very well hidden supply of treats for Gabriel and she remembered all kinds of different quirks that would make the T/S owners happy. And for an encore she arranged about 600 changeovers a year.

Shelley has retired from Trelowarren to begin her new career in adult social care for which she has been training for some time. Watch out idiot men in the Council, your time will come! We’re hoping to see plenty of her and that she’ll still do the famous Shelley re-cycled Christmas tree.

Anne came to Trelowarren from Timeshare sales in Malta about eight years ago and stayed with us from a handful of houses through to the foundations being laid for new build numbers 10-14. Always a smiling face for the customers and a sympathetic ear for her multitude of friends amongst the owners she kept her finger on the pulse of the sales and self-catering bookings and guarded The Board. In her own time she successfully bred enormous Bernese Oberland dogs, went to Art classes and enjoyed music. Thank you to Anne and good luck for her and Toby.. 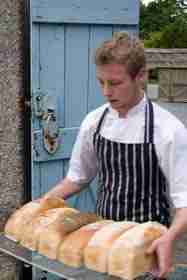 Mike has been second chef at the Restaurant for three years. Resourceful and reliable he was happy to support us in all kinds of endeavours from making hundreds of pizza bases (turns out he’d worked in a proper pizzeria) and then coming over to cook them in the wood fired oven, to cheerfully having a televised cook-off with the C4 3 Hungry Boys. He has decided to make chocolate his life and is working full time as a chocolatier and selling the fruits of his labours here on The Lizard.

Ben has been a commis-chef and occasional second in the NYR for three years. He started with us on the apprenticeship scheme with day release to the catering college in Camborne. He has been a lively and engaging member of the kitchen staff and turned out cheerfully on Sunday evenings to cook pizzas in aid of the NSPCC as well as putting a considerable percentage of his wages for those evenings back into the pot for the charity. Ben has moved on to run his own kitchen in Hayle and we wish him the best of luck.

Jenny Jewel is the new housekeeper. Jenny is from a hotel background and she is doing very well just finding the houses and seeing to all the details that Shelley left in the book. Please be patient if your own foible (three double beds piled vertically and only dressed in scarlet satin or whatever) isn’t immediately forthcoming and just ring reception as an aide memoire.

Emma Bourne and Emma Dunkley are working hard in the spa and looking forward to meeting all the customers in our second year.

Holly Bailey has started as our seamstress. She is a fashion and textiles graduate of Falmouth College of Art and will be tackling the blinds that need re-lining or replacing and all the general repairs and renewals. As it turns out she is a whizz at baking too, so I am hoping to persuade her to make cake for the shop and for the cottage arrivals.