Daphne du Maurier commented on the beautiful sound of the Trelowarren clock (made in 1757) when she first visited the house in 1930 but in 1972 it was stolen. 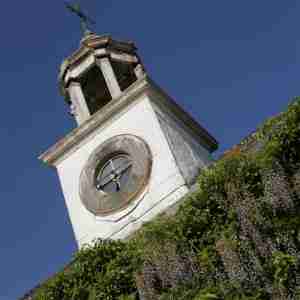 The stable clock at Trelowarren was stolen in 1972. Until then the sound of it ringing out the hours could be heard for miles around and Daphne du Maurier commented on it when she first visited the house in 1930.

Roll forward to 2008, at just about the time when the empty clock tower was becoming so dangerous that it was to be lifted down to await restoration, and (in a totally unconnected and bizarre way) Amanda Vyvyan was visiting friends in Brussels. Wandering the quaint cobbled streets of the old town her eye was drawn to a shop window that featured a beautiful clock mechanism and so she went over for a closer look and BINGO! There it was: the Trelowarren clock. What are the chances of that?

Now the big stumbling block was proving it was indeed the Vyvyan clock. Enter Virginia Vyvyan and her previously untapped, but nonetheless amazing, sleuthing skills. She got the police to dig out their records, she talked to everyone who remembered the clock and Jonet Vyvyan searched the very dusty and uncatalogued muniment room for a photo – which she found. And then, clutching all the proof necessary Virginia got onto the appropriate police department to get out there and reclaim our stolen clock.

You probably wont be amazed to hear that it doesn’t work like that. Apparently the police don’t do that kind of work. I don’t ever remember hearing that Munch’s Scream had to be bought back because the current owner had a receipt. In every other aspect of the law that I encounter ignorance is no defence – as in:

‘I didn’t know I was going to go through the VAT barrier eight months before I did.’ ‘Well madam that’ll be the VAT you owe us and just for good measure a fine for not being prescient. Ignorance is no defence etc.’

The kindness of aunts runs through this story like the words in a stick of rock and we were very grateful when the impasse was overcome by Virginia offering, once again, to come to the rescue. She and Amanda went back to Brussels, bearded the clockman in his cave, and have returned triumphant. It is being shipped home this week. Tada!

So we restored the tower and then the clock found its way home too. We could make something of the parallels between the 1666 restoration and this one but we wont. Let’s just leave it with Donne’s ‘hours, days, months which are the rags of time’ being rung out by the old bell at Trelowarren. It isn’t actually the clock that’s in the tower but the clock is here and so is the tower. How’s that for an ending?