Our wonderful walks are open April-October 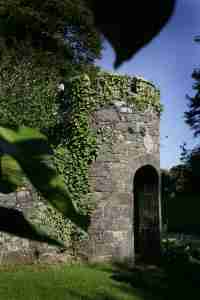 Visit a Victorian folly, the highest point on The Lizard, an Iron Age Hill Fort, a river formed by the Ice Age and an 18th century garden. The Woodland walk is open from 11am to 5pm during the season.

You will find the Manor of Trelowarren in the 11th century Domesday Book, but it was farmed, forested and hunted over long before that.

The walk is open year-round to timesharers and self-caterers staying with us, and to the visiting public between 1st April and 30th September.  The main walk is about four miles (6.5km) long, but there is a shorter, circular walk of one mile (1.6 km) and an “extension” to Tremayne Quay, on the Helford, which is 2.5 miles (4km) each way.

The walks are varied and provide a wonderful mixed landscape of views, historic features, natural variety and more ordered planting – with the occasional bonus of rare wildlife. Specific points of interest include:

The Turret. A clever Victorian reworking of old stones to resemble part of a medieval fortification.

The Mount. Built with earth cleared to build a drive, again in the 19th century. The highest point on the peninsula.

The Fogou. A Cornish mystery. A large underground chamber with a single, narrow entry beneath an Iron Age Hill Fort.

Ilex Avenue. So-called because it is the botanical name for the ancient Mediterranean oaks planted here in the 19th century.

Tremayne Quay. Reached through beautiful National Trust woods, given to the Trust by the Vyvyan family, and overlooking the sailing and fishing paradise of the Helford River.

The Restoration Gates. The Vyvyans were staunch royalists in the Civil War and erected these Grade 1-listed gates to mark the Restoration of the Monarchy in 1660.

The walks all end where they begin; at the Stable Yard, the Lizard Art gallery and of course, the Pantry and  New Yard Restaurant